Mike Flanagan is scaring the masses with his latest horror flick,Â Oculus, featuring Karen Gillan, Branton Thwaites and Katee Sackhoff. The Horror News Radio grue-crew review the film with a heated discussion agreeing on tone, atmosphere and casting while disagreeing on effect, scares and … that ending.

Co-hostsÂ Doc Rotten,Â Santos (The Black Saint) Ellin Jr.,Â Dave DreherÂ and Thomas MarianiÂ are back again this week to give you the best in horror as they recap, review and obliterate all that is horror this week! Starting this week is a new segment, The Black Saint’s Horror Trivia Contest where one lucky listener will receive theÂ eOne Films Blu-Ray Prize Pack Giveaway:Knights of Badassdom.

Oculus (2014)
While Doc and Dave agree that Mike Flanagan’s chillerÂ OculusÂ works as a great introductory horror film for non-horror fans, or a great “date movie,” Santos and Thomas are not as supportive. The review heats up as the two sides discuss the film’s successes and failures. An irritated Santos wants nothing to do with it; however, Dave shares he and his wife enjoyed the film greatly – his wife, who rarely likes horror films, wants to see it again. The film is creepy, full of atmosphere with terrific performances from its cast providing the film with a captivating set up but a divisive conclusion. The film is garnering strong reviews outside of HNR as it comes in at number 3 in the weekend box office, grossing $12 million in the U.S.

Horror News of the Week for 04/14/2014
Dave Dreher Â shares the Horror News of the Week beginning with Doc’s request to check out the “Muto” roar of the opposing kaiju fromÂ GodzillaÂ (2014). Thomas is curious about the rumors that Johnny Depp may be secretly starring in Kevin Smith’s horror opus,Â TuskÂ (2015). Dave is horrified with the sudden and maddening closure ofÂ FearNetÂ by Comcast. Boo. Hiss. The documentaryÂ Never Sleep AgainÂ is getting a book treatment. And Netflix announces the second season of Eli Roth’sÂ Hemlock Grove. 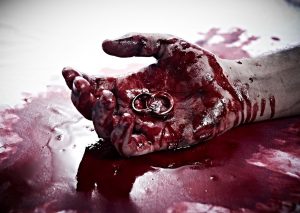 Anchor Bay Entertainment DVD Giveaway – Death Do Us Part (2014)
Horror News Radio is teaming up withÂ Anchor Bay EntertainmentÂ to provide a killer DVD giveaway for their filmÂ Death Do Us PartÂ (2014) from director Nicholas Humphries featuring Kennedy Jamieson and Ryan Harris. The film launches April 15, 2014 on VOD and DVD.Â Entries will be accepted until Midnight (Eastern Standard Time), April 27, 2014. All you need to do is complete the The Black Saint’s HNR Horror Trivia Question at this address:Â https://horrornewsradio.com/trivia-deathdouspart. The DVD giveaway is open to US addresses only.

eOne Films Blu-Ray Prize Pack Giveaway – Knights of Badassdom
Horror News Radio is teaming up withÂ eOne FilmsÂ to provide an awesome Blu-Ray Prize Pack featuring the filmÂ Knights of Badassdom, currently out on VOD and DVD (as of April 2, 2014). The film is from director Joe Lynch and it features Ryan Kwanten (True Blood, Dead Silence), Steve Zahn (Joy Ride) and Peter Dinklage (Game of Thrones, X-Men: Days of Future Past). We have a winner selected: Jayme Isaacs. Congrats!

The Alien franchise returns to theaters this past weekend with Ridley Scott’s Alien: Covenant. While it is a direct sequel to Prometheus, featuring fan-favorite David (Michael Fassbender), the film suggests a new origin for the xenomorph species….and a plethora of gory, gruesome special effects! For the What Have You Been Watching segment, Thomas visits David […]

https://traffic.libsyn.com/secure/docrotten/HNR403-LovecraftCountry-S01E10.mp3Podcast: Play in new window | DownloadSubscribe: RSSOn this episode of Horror News Radio: The Grue-Crew review… LOVECRAFT COUNTRY (2020) Season 1 Episode 10 “Full Circle” Be sure to subscribe to the Gruesome Magazine YouTube channel to catch all the HNR episodes. And check out Patreon to see how to watch the recordings live! This […]