The Purge: AnarchyÂ (2014) picks up one year after the Purge presented last year except this entry follows Frank Grillo as Seargent Leo Barnes, a man on a mission to purge but runs into two sets of characters in deep doo doo deciding to help them survive the night. Capitalizing on the premise of The Purge, Anarchy takes the action to the streets to the satisfaction of the fans but forgets to bring characterization along with it. Hollow? Maybe. Action packed? You bet. Check out the review from the HNR grue-crew.

Dave ramps up the horror news of the week with bloody bits and pieces aboutÂ Grizzly,Â The Overlook MotelÂ andÂ Mad Max Fury Road. Joseph Perry is now the HNR man-on-the-street in South Korea at the PiFan film festival with his reviews ofÂ Dead Snow Red vs Dead, Blood GlacierÂ and other genre films.

Co-hostsÂ Doc Rotten,Â Santos (The Black Saint) Ellin Jr.,Â Dave Dreher,Â Thomas Mariani and Vixen, the voice of reason, are back again this week to give you the best in horror as they recap, review and obliterate all that is horror this week! Â The show also containsÂ Stump the StainÂ as recorded live atÂ MonsterConÂ toy and comic convention in Greenville, South Carolina July 18-20, 2014.

The Purge: Anarchy (2014)
Thomas reminds his co-hosts that all but Vixen hated on The Purge last year giving the film a screaming 1 out of 5 before the grue-crew jump into their review of the its 2014 sequel,Â The Purge: Anarchy. Dave perhaps says it the best, “For a film with ‘Anarchy’ in its title, where is all the Anarchy?” Frank Castle…uh…Frank Grillo, rather, takes to the streets on Purge Night handing out violence, gore and death, but does the action hold enough interest to elevate the film and the now successful franchise.

What Have You Been Watching: PiFan by Joseph Perry
From South Korea, attending theÂ Puchon International Fantastic Film Festival, Horror News Radio man-on-the-street reported Joseph Perry brings short reviews from a handful of genre films presented early in the festival:Â Dead Snow: Dead Vs Red,Â What We Do in the Shadows, Blood Glacier (The Station), Darkness by Day, When Animals Dream,Â DjinnÂ Â Â Zero Theorem.

Horror News of the Week for 07/21/2014
Dave Dreher Â shares the Horror News of the Week beginning with news of the death of writer/director John Fasano, the man behindÂ Rock ‘n’ Roll NightmareÂ andÂ Black Roses. We are finally treated with images from the forthcoming George Miller apocalyptic thrillerÂ Mad Max Fury Road. The new trailer forÂ GrizzlyÂ is NOT a remake of the 1976 b-movie classic, but a new nature horror film fromÂ director David Hackl and stars James Marsden, Thomas Jane and Billy Bob Thornton. In Stephen King news, Mark Romanek is now attached to direct a prequel toÂ The ShiningÂ titledÂ The Overlook Hotel. Effects artistÂ Vincent Guastini has released photos and a trailer for his segment from anthology horror filmÂ Hellivator Man.

Stump the Saint: Recorded live at MonsterCon in Greenville, SC – July 18-20, 2014Â
Doc Rotten and The Black Saint return from the MonsterCon where the duo presented free DVDs and Blu-rays provided by RLJ Entertainment for convention patrons who attempted toÂ Stump the Saint. 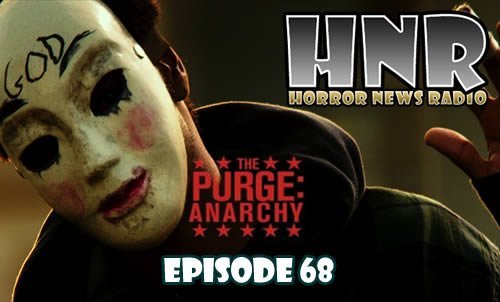 http://traffic.libsyn.com/docrotten/HNR289-TheNun.mp3Podcast: Play in new window | DownloadSubscribe: RSSThe Halloween 2018 second trailer is here and it impresses – as does its premiere at TIFF. October looks fantastic! Rest in peace Burt Reynolds – thank you for Deliverance, Smokey and the Bandit, Cannonball Run, and so much more.Â  Guest host Jeff Mohr joins Christopher,Â Vanessa,Â and Doc to […]