AnnabelleÂ (2014) scares up some solid box office but struggles to gain ample praise from the HNR grue-crew. The film dives into the back story of the creepy-as-all-get-out doll from The Conjuring. Watch your basements!

Co-hostsÂ Doc Rotten,Â Santos (The Black Saint) Ellin Jr.,Â Dave Dreher,Â Thomas Mariani and Vixen, the voice of reason, are back again this week to give you the best in horror as they recap, review and obliterate all that is horror this week! Â This week we announce that it isÂ time to remind you about theÂ contest to win a fantastic Halloween mask from Ghoulish Productions.

AnnabelleÂ (2014)Â
Expanding the story behind the possessed doll introduced in the intro toÂ The Conjuring,Â AnnabelleÂ tries hard to scare and entertain audiences across the globe. Gauging from the week end box office, the film seems to have struck a chord with horror and film fans. The blandest of bland main characters lumber along until a demon enters into the picture to spice things up. A few good, well orchestrated scenes a great horror film does not make. The grue-crew discuss the successes and failures found inÂ Annabelle. 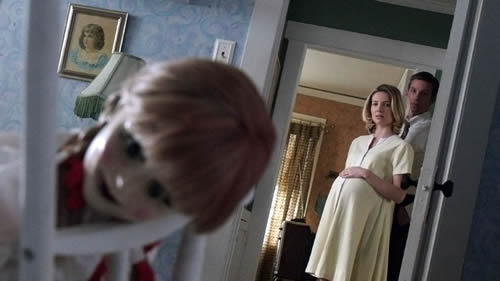 What Have You BeenÂ Watching:Â Gone Girl
Thomas Mariani jumps in with a review of David Fincher’s latest film, Gone Girl. The film receives high praise from Thomas who dances around all the plot twists and surprises in the film. He cautiously discusses deserved Oscar nods and shares it is NOT a date movie!

Horror News of the Week for 10/06/2014
Dave returns to bring youÂ the Horror News of the Week with news ofÂ the return of Twin Peaks from David Lynch coming to Showtime in 2016. Annabelle has drawn outÂ Don Mancini to proclaim he wants to make Chuck vs Annabelle. Yeah, right.Â Vampires and Werewolves attack in Joe Dante’s Ombre Amore and no one really cares. The marketing behind ABC’s of Death 2 are stirring up a stink with 26 NSFW pictures from the film, one for each segment. Director Adam Green return with another Happy Halloween short. 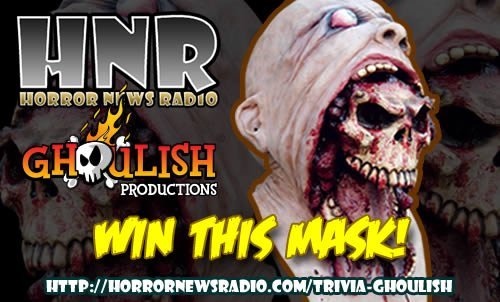 Contest: Ghoulish Productions presents the mask, Blurp Charlie
Horror News Radio is teaming up with Ghoulish Productions out of Atlanta, GA to give away an awesome and gruesome MASK just in time for Halloween! Check out the visual forÂ BLURP CHARLIE!Â Oh, my! Fantastic! The contest is open untilÂ Midnight,Â Sunday October 19, 2014 (EST) to enter. Just head over toÂ https://horrornewsradio.com/trivia-ghoulishÂ for the change to win this incredible prize. The contest is open to US addresses only. But! Ghoulish Production is also offering an exclusivecoupon for all HNR listeners to save 10% off your entire order, just type in the coupon codeÂ HNRÂ to get your discount! Just head over toÂ http://www.ghoulishproductions.comÂ to check out all the kick ass masks.

http://traffic.libsyn.com/docrotten/HNR322-Avengers-Endgame.mp3Podcast: Play in new window | DownloadSubscribe: Android | RSSThis week on Horror News Radio: GODZILLA KING OF THE MONSTERS releases one more trailer to win us over, Michael Biehn unexpectedly returns as Hicks for a new ALIEN 3, And the GrueCrew review…AVENGERS: END GAME. This is HORROR NEWS RADIO, the official GRUESOME MAGAZINE podcast. […]

http://traffic.libsyn.com/docrotten/HNR300-NightEatsTheWorld-RobertKurtzman.mp3Podcast: Play in new window | DownloadSubscribe: Android | RSSFor our 300th episode, we are honored to interview Robert Kurtzman, the legendary effects artist who also oversaw the effects for THE HAUNTING OF HILL HOUSE. The Grue-Crew also review THE NIGHT EATS THE WORLD (2018) from director Dominique Rocher, due to a troll-worthy recommendation from […]

X-Men: Days of Future PastÂ (2014) somehow, miraculously, manages to mix in the X-films (X-Men, X2, The Wolverine) and the First Class X-Men films together while simultaneously negating the negative entries in the franchise (X3 and X-Men Origins). The grue-crew revel in the film’s accomplishments and question some of the time travel shenanigans. Dave ramps up […]