Dave begins theÂ HORROR NEWS OF THE WEEK segment with news about Halloween Returns, the remake of The Burning called Cropsey and a rumored remake of Jaws. Oh, hell no. In the What Have You Been Watching segment found footage finds its final nail with Oren Peli’s AREA 51Â while Joseph Perry returns with fiveÂ reviews from the BiFan Internation Film Festival:Â Ghoul, There Are Monsters, Afterimages, Sweet Home and House of Shadows..

Co-hostsÂ Doc Rotten,Â Santos (The Black Saint) Ellin Jr.,Â Dave Dreher,Â Thomas MarianiÂ andÂ Vixen, the voice of reason, are back again this week to give you the best in horror as they recap, review and obliterate all that is horror this week!Â Wait, is that Stump the Saint?! 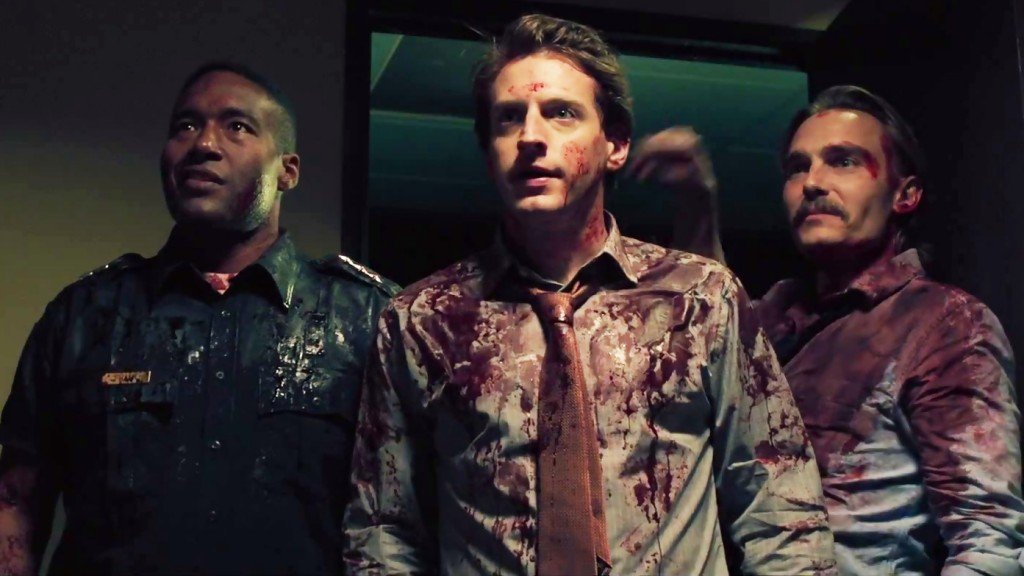 The familiar and friendly face to horror fans, Fran Kranz from Cabin in the Woods leads a cast of office slackers that face being over run by vampires in the horror comedy BLOODSUCKING BASTARDS. The film benefits from a witty script, a great cast and gallons of grue but still has trouble gelling as a whole film. The Grue-Crew review the film providing thoughts on what jokes works, what effects thrill and what actors provide the most to the uneven but enjoyable script.

Over five years in the making – or perhaps rotting on a Blumhouse shelf – the follow-up film from Oren Peli (Paranormal Activity) called AREA 51 finally makes its way into the public’s eye – currently available on Netflix. The found footage film follows a group of overly curious young men investigating what lies beneath the storage buildings found in the infamous Area 51. Will they find a conspiracy, aliens or a horror beyond imaging. The Black Saint wonders if they will find … a film, any talent or any common sense. Doc, on the other hand … well, the less said the better. 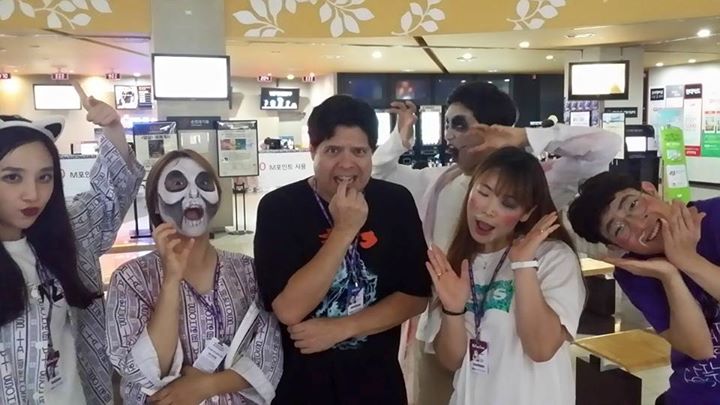 International HNR Reported Joseph Perry returns with another BiFan International Film Festival update featuring reviews of fiveÂ more extraordinary horror movies. This week he digs into Ghoul (Czech Republic), There Are Monsters (Canada), Afterimages (Singapore), Sweet Home (Spain) and House of Shadows (Italy/Ireland). Sadly, however, there is little to recommend about any of these films. Find out why!

Dave shares the Horror News of the WeekÂ beginning with an interview with director Marcus Dunstan about the upcoming Halloween Returns. Â He follows that up with news of a semi-remake of the Tom Savini classic The Burning tentatively calledÂ Cropsey. With Steven Spielberg’s rumored return to Universal could a remake of JAWS be far behind. Damn those rumors. Friday the 13th is getting a 4D experience treatment in PittsburghÂ and Las Vegas. Finally, Cary Fukunaga offers up his reasoning for leaving the IT remake. Damn those studios. 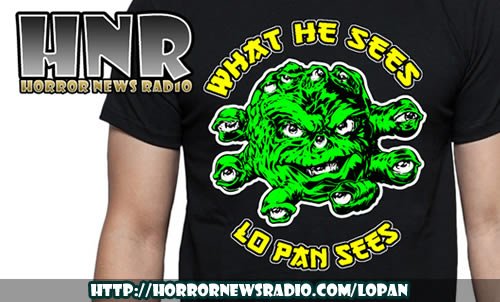 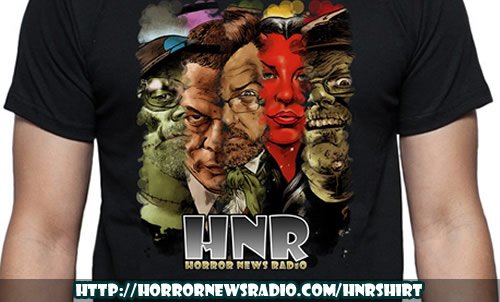 http://traffic.libsyn.com/docrotten/HNN125-Sinister2.mp3Podcast: Play in new window | DownloadSubscribe: Android | RSSBughuul returns in the Blumhouse production, SINISTER 2, from director Ciaran Foy with a script by Scott (Doctor Strange) Derrickson and C. Robert Cargill.Â James Ransone returns as Deputy So-And-So as he continues his investigation into the boogieman leading him to a family in danger of becoming […]

http://traffic.libsyn.com/docrotten/HNR281-DevilAndFatherAmorth.mp3Podcast: Play in new window | DownloadSubscribe: Android | RSSDoctor SleepÂ casts itsÂ Wendy TorrenceÂ and Dick Holloran. Did Venom finally get a trailer to get excited about? Arrow and Kino LorborÂ release some killer Blu-rays including Schlock, City of the Living Dead, and Trilogy of Terror. And, Christopher,Â Vanessa,Â and Doc discuss the William Friedkin directed documentaryÂ The Devil and Father […]

Eps 70 Guardians of the Galaxy

Guardians of the GalaxyÂ (2014) strikes gold at the box office. The risk pays off and Marvel has another huge hit. But what do the HNR grue-crew think of it? Will Dave finally like a super-hero movie? DaveÂ sharesÂ the horror news of the week with the sad announcement of the passing of legendary make-up effects artists Dick […]

Review of BLADE: THE IRON CROSS

https://traffic.libsyn.com/secure/docrotten/HNR377-BladeIronCross.mp3Podcast: Play in new window | DownloadSubscribe: Android | RSSOn this episode of Horror News Radio: The Grue-Crew review… BLADE: THE IRON CROSS (2020). Be sure to subscribe to the Gruesome Magazine YouTube channel to catch all the HNR episodes. And check out Patreon to see how to watch the recordings live! This is HORROR […]

https://traffic.libsyn.com/secure/docrotten/HNR375-Scoob.mp3Podcast: Play in new window | DownloadSubscribe: Android | RSSOn this episode of Horror News Radio: The Grue-Crew review… SCOOB! (2020). Be sure to subscribe to the Gruesome Magazine YouTube channel to catch all the HNR episodes. And check out Patreon to see how to watch the recordings live! This is HORROR NEWS RADIO, the […]

https://traffic.libsyn.com/secure/docrotten/HNR373-Followed.mp3Podcast: Play in new window | DownloadSubscribe: Android | RSSOn this episode of Horror News Radio: The Grue-Crew review… FOLLOWED (2020). Be sure to subscribe to the Gruesome Magazine YouTube channel to catch all the HNR episodes. And check out Patreon to see how to watch the recordings live! This is HORROR NEWS RADIO, the […]

https://traffic.libsyn.com/secure/gruesomemagazine/GM122-ScarePackage.mp3Podcast: Play in new window | DownloadSubscribe: Android | RSSDoc Rotten from Horror News Radio. Jeff Mohr from Decades of Horror: The Classic Era. And Crystal Cleveland, the Livin6Dead6irl from Decades of Horror: 1980s share their thoughts about this week’s awesome collection of streaming horror films. Joining the crew this week is Horror News Radio […]

Reviews of SCREAM, QUEEN! MY NIGHTMARE ON ELM STREET and CONFESSIONAL

https://traffic.libsyn.com/secure/gruesomemagazine/GM120-ScreamQueen-Confessional.mp3Podcast: Play in new window | DownloadSubscribe: Android | RSSDoc Rotten from Horror News Radio. Jeff Mohr from Decades of Horror: The Classic Era. And Crystal Cleveland, the Livin6Dead6irl from Decades of Horror: 1980s share their thoughts about this week’s awesome collection of streaming horror films. Joining the crew this week is Horror News Radio […]

Reviews of BECKY and DREAMLAND

https://traffic.libsyn.com/secure/gruesomemagazine/GM118_Dreamland-Becky_20200527.mp3Podcast: Play in new window | DownloadSubscribe: Android | RSSThis week, the Grue-Crew explores the supernatural with a pair of films where finding your true self can be truly scary. The first film this week, DREAMLAND from director Bruce McDonald, features Stephen McHattie in a pair of roles facing off Juliette Lewis, Henry Rollins, and […]

https://traffic.libsyn.com/secure/docrotten/HNR372-50States.mp3Podcast: Play in new window | DownloadSubscribe: Android | RSSOn this episode of Horror News Radio: The Grue-Crew review… QUIBI’S 50 STATES OF FRIGHT and THE STRANGER. This is HORROR NEWS RADIO, the official GRUESOME MAGAZINE podcast. Back with Doc Rotten once again are the scariest, goriest, bloodiest co-hosts on the ‘Net. Dave Dreher, the […]

Reviews of INTO THE DARK: DELIVERED and A NUN’S CURSE

https://traffic.libsyn.com/secure/gruesomemagazine/GM115_ANunsCurse-IntoTheDarkDelivere.mp3Podcast: Play in new window | DownloadSubscribe: Android | RSSThis week, the Grue-Crew review a pair of films that are tangentially suited for a late… Mother’s Day. The first film this week, A NUN’S CURSE from director Tommy Faircloth, follows a young woman looking for clues to the supernatural whereabouts of the murderous Sister Monday. […]

https://traffic.libsyn.com/secure/gruesomemagazine/GM114_0.0MHz-Z-BloodQuantum_20200429.mp3Podcast: Play in new window | DownloadSubscribe: Android | RSSThis week, it’s a SHUDDER triple feature of chills, thrills, and spills. The first film this week, 0.0 MHz from director Sun-Dong Yoo, follows a group of “ghost hunters” who encounter more than they bargained for during an investigation. The second film, Z from director Brandon […]